May Blog: It’s All About That Cheese 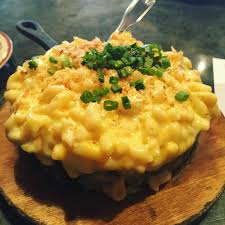 There might, oddly, be no more American dish than macaroni and cheese.  And yet, quite obviously, its origins aren’t American, but Italian.  Or French.  Okay, European.

Let’s start with the origins of pasta, and the famous story that pasta was introduced to Italy by Marco Polo, who brought it back from China.  Well, maybe not.  There are references to a kind of pasta, cooked by boiling, in a section of The Talmud written in the Fifth Century AD.  Some suggest that during the Arab invasions of Sicily (in the 7th, 8th and 9th centuries) pasta was introduced to Italy.  Marco Polo, who returned from China in 1295, had described some Chinese noodles as being like lagana, a Roman word that describes a noodle made from wheat.

The name macaroni comes from a Sicilian term for kneading forcefully, with energy.  The making of pasta was typically a daylong effort, with the dough being kneaded with the feet.

The first known recipe for macaroni and cheese dates back to 13th Century Italy.  A recipe called “de lasanis” appeared in Liber de Coquina (Book of Cooking), using fermented dough cut into two-inch squares, cooked in water, and tossed with grated cheese.  A French cookbook from the 14th century, Forme of Cury, offered a dish called makerouns, which combined (according to food52.com) thin pastry dough, cheese, and butter.

Many suggest that Thomas Jefferson should be credited with bringing macaroni and cheese to America.  In 1787, returning from France, Jefferson brought back a pasta machine, which he felt he could improve upon. It appears that he (or his cousin, Mary Randolph, who served as hostess while he was president after his wife died) served macaroni and cheese at a state dinner, while he was president.  A guest at the time (according to www.thenibble.com) reports that he was served “a pie called macaroni,” which was probably the baked version.  But – and here is where the story gets even more interesting – it is quite likely that the chef who actually created this dish for Jefferson while he lived in Paris was James Hemings, one of Jefferson’s slaves and brother to Sally Hemings, believed by many to have been the mother to a number of Jefferson’s illegitimate children.  James Hemings was freed by Jefferson in 1796, but one condition of obtaining his freedom was that James train his brother Robert to replace him as chef in the Jefferson household.  It was no doubt Robert who actually prepared the “pie called macaroni” in 1802.  Yet it was Mary Randolph who was credited with the recipe; in 1824, Randolph published The Virginia Housewife, which included her (or Heming’s?) recipe for “macaroni and cheese.”

Whatever, we are blessed in the Hamden area with a number of restaurants that offer their own marvelous macaroni and cheese dishes.  At the recent 2016 Hamden Regional Chamber of Commerce Expo, Eamonn Ryan’s The Playwright offered his delicious lobster macaroni and cheese (Cellentani pasta and cheddar cheese parmesan cheese sauce).  Mickey’s Restaurant offers, on his bar menu, “Mickey’s Macaroni & Cheese,” featuring Swiss, Cheddar, American, and Parmesan cheeses.  Eli’s on Whitney has two versions, one with pulled pork, one without. Side Street Grille offers their Steve Jobs Fired Mac & Cheese; and new to Hamden Wood n Tap offers a great Mac n Cheese dish.  There are probably many more, so go ahead, indulge a little!